The OnPitRoad.com Crooked Still Legends Series started the evening with 60 laps around Lanier National Speedway. 21 races qualified for the event. Matt Hoose started on the pole and led 34 laps before giving up the lead to Ronald Henrie who led the final 26 and took the win. Mitch Leinen finished 2nd followed by Ricky Brinkman, Anthony Bunch, and Travis Ellington. 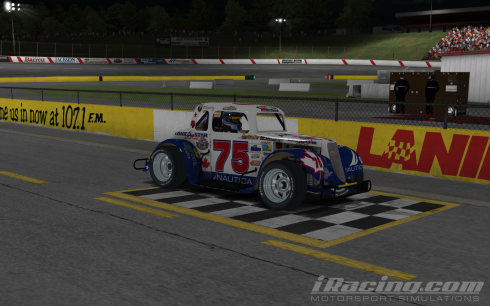 Leinen leads the championship point standings followed by Brian Young and Lowell Jewell with 5 races remaining in the season. Next up is Oxford Plains!

The Whiskey Run Street Stock Series took to the track next with Brian Neff starting on pole due to the field inversion rule. The race saw 3 lead changes among 4 drivers. Leinen took the win followed by Keith Haney, Brian Neff, Ronald Henrie, and Brad Spidle. 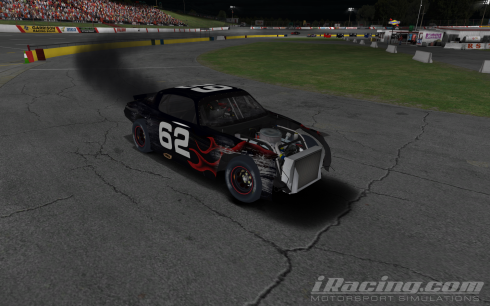 Jewell To The Garage

Lowell Jewell was knocked out of the championship points lead by a couple of incidents. He falls to 2nd with Keith Haney taking over the top spot. Spidle is 3rd followed by Leinen and Brian Young. Only 16 points separate the top 5 with just 1 race remaining! The series visits Langley Speedway next Saturday night!

Like Loading...
This entry was posted on Sunday, March 9th, 2014 at 11:04 am and posted in Bootleg News, Crooked Still Legends Series, iRacing, OnPitRoad.com, Whiskey Run Street Stock Series. You can follow any responses to this entry through the RSS 2.0 feed.
« Leinen To The Top
Leinen Doubles, Haney Wins Championship »